Two in a row for North Geelong Football Club 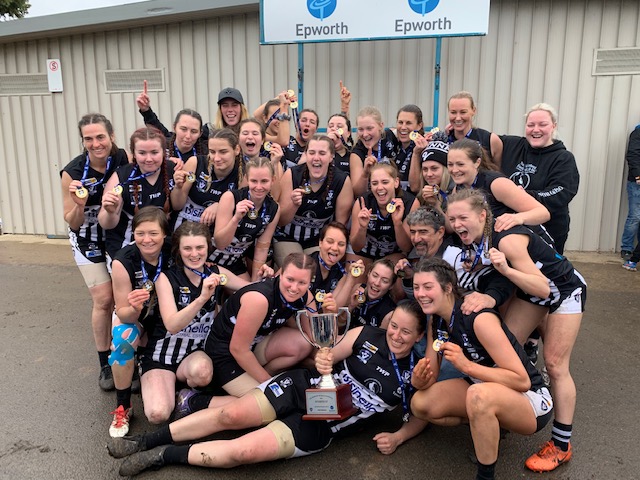 Congratulations to North Geelong Football Club’s women’s team after winning their second premiership in a row.

The senior women’s side won the 2019 Division 2 Grand Final against Drysdale on August 17. Their win follows their 2018 grand final defeat of St Mary’s.

The team had been going through a re-build this season welcoming a new coach and several new players.

In 2012 North Geelong Football Club, which is proudly sponsored by Bisinella Developments, became the first team to field a female side in Geelong.

“Over the years North has been extremely successful in women’s football, with many premierships won in a short period”, said Anthony Davis from the North Geelong Football & Netball Club.

“This has made our players targets for other teams trying to build success in woman’s football. “

“At the end of 2018 we saw our coach Shannon leave for another role in the league, with several premiership players also moving on to other clubs.”

“Couple that with our best players from the year before being selected in the Geelong VFL side, we were looking like being short of players this year.”

“Our new coach Chima Gomez, along with the committee and leaders of the team had faith and continued to train and recruit.”

Off the field North Geelong Football & Netball Club continue to gather support from local businesses in the northern suburbs, increasing their sponsorship partners to 40 this year.

Bisinella is a major sponsor of the North Geelong Football & Netball Club.

In January 2018 Bisinella announced a three year sponsorship, worth $45,000, which is helping the club to continue to provide critical sport access for youth in the northern suburbs.

At the time of the announcement, North Geelong Football director Paul Cotter said Bisinella’s support was the “most significant sponsorship the club has ever had”.

“Sponsorship is key to our club’s success, enabling us to improve our facilities to attract players and supporters to North Geelong Football & Netball Club,” Mr Davis said.

“Last season we completed new flooring in the rooms and bar area, installed a big screen TV, renovated our office area and provided new game day apparel for the entire club. In 2019 we have confirmed both room extensions, supported by a local and state grant. We have also secured funding from council, matched by our past player group The Silver Magpies,  for the completion of an electronic scoreboard.”

“These projects will be completed for the 2020 season. Without sponsorship, the North Geelong Football & Netball Club would still be operational as a club, but would not have the resources to make continued improvements to our facility for both the club and the local community.”

“We also completed our entrance to the club last season. With assistance from North Geelong Glass we modernised our honour boards using solid glass panels and installed glass cabinets for our numerous club trophies.”

The club has been building support for the past six years. In 2014, it had five sponsors and now is supported by 40 local businesses.