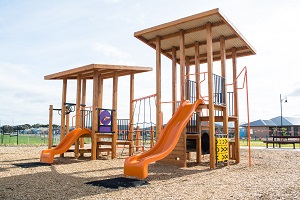 “We are excited to have the park open for their use and enjoyment. There is the playground and plenty of kick about space for the kids to run.”

“With Lara Views Estate now sold out we are looking forward to delivering Lara Lakes, our new 500 lot development in Lara West, which will start selling towards the end of this year.”

Lara Views Estate’s landscaping works have been carried out by Auscapes, who were responsible for the landscaping of Bisinella’s award-winning Grand Lakes Estate.

In 2015, Grand Lakes Estate won the UDIA award (Urban Development Institute of Australia) for the best residential estate in Victoria, a first for anywhere in the Geelong region, let alone Lara.  Grand Lakes Estate was also regarded as a showcase for environmental excellence in Australia by winning the state and then the national UDIA Award for Environmental Excellence in 2016.

Completed in 2015, Grand Lakes Estate was built around 18ha of open space including three ornamental lakes and expansive areas of densely-planted wetlands and landscaped parkland.

• Stage 7 - currently under construction and scheduled to be completed in October, 2018

For more information about Lara Views Estate please contact our sales office on 5274 1643.