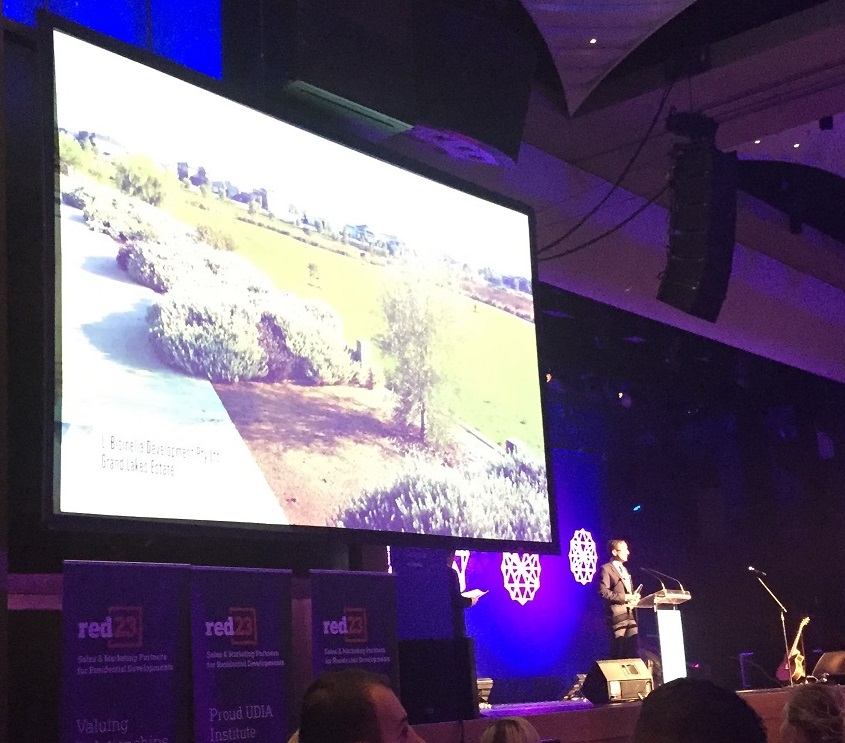 In a first for the Geelong region in the 20 year history of the UDIA Victoria awards, Grand Lakes was judged the best residential estate and also won the award for environmental excellence.

The awards were presented to development manager Richard Bisinella in front of more than 700 people at the 20th UDIA Victoria Awards for Excellence at Crown Palladium on Friday 4 December 2015.

Grand Lakes was successful against entries from some of the biggest development companies in Australia and will be a finalist for the national awards early next year.

“We’re proud to have brought these awards to the Geelong region,” Richard Bisinella said.

“In particular, it’s a terrific honour for the town of Lara.”

The judges described Grand Lakes Estate, completed earlier this year, as “a brave development” that “provides a strong focus on community, integration and connectivity”. They were impressed by the centrally-located café, situated next to a popular children’s playground and well connected to linear parks and pathways.

Grand Lakes, commenced in 2009, turned complex drainage challenges into an environmental oasis.
The estate is now a vibrant community of more than 2000 residents that retains the rural feel so special to the growing township of Lara, midway between the western edge of Melbourne and central Geelong.

The 807-lot estate has been built around 18 hectares of open space including three ornamental lakes and expansive areas of densely-planted wetlands and landscaped parkland.

Originally flat and floodprone, this urban floodway is now criss-crossed by an extensive network of walking and cycling trails and is home to increasing varieties of birdlife and native fauna.

Bisinella Developments’ vision for the site was not only to create a high quality residential community but also to contribute significantly to the lifestyle and wellbeing of Lara (population now more than 14,000).

The company invested more than $12 million, or approximately $15,000 per lot, in the parklands features and other public infrastructure at Grand Lakes including:

• Millars Café
• The Bisinella Community Centre
• Two state-of-the-art playgrounds, one either side of the lakes
• Land earmarked for a childcare centre (construction due to start soon).

A unique feature of Grand Lakes is the 10 year agreement with the local Council for the developer to maintain the public open space areas, enabling the landscaping to be maintained, beyond the completion of the development and sales period, to much higher standards than the Council would apply.

The estate also has the first homes in Lara or the northern suburbs of Geelong with access to high speed optical fibre broadband. This NBN-ready network was installed by OptiComm to service the last 239 lots (stages 14 to 23).
Grand Lakes offered a large variety of lot sizes ranging in price from $170,000 to $220,000.
Sales averaged more than 140 lots per year.

Richard Bisinella said his father Lino and the whole team at Bisinella Developments are very proud of Grand Lakes and the improvements delivered for the Lara community.

“This award is great recognition for everyone who worked on the project including our planning and engineering consultants TGM Group, our drainage consultants BMT WBM, our landscape architects Mexted Rimmer, our landscaping contractors Ausscapes, and our civil contractors Wellam Constructions,” Mr Bisinella said.
At the outset, a fundamental consideration in designing Grand Lakes was to establish an integrated and best practice drainage management system.

The urban form was also influenced by the rural feel of the existing township and the likely expectations of the housing market in the region. Grand Lakes enjoys splendid views of the nearby You Yangs mountain range and retains the rural atmosphere of Lara while also providing easy access to transport links, shopping centres, schools, recreation facilities and community services.

The parklands have a 2.5 metre wide off-road shared walking/cycle path running along either side to encourage residents to walk or ride rather than use their cars. A bus service connects the estate to Lara train station with frequent services to Geelong and Melbourne.

In engineering and environmental terms, Grand Lakes Estate has been a landmark development for Lara and Geelong. The leading edge techniques used to resolve the engineering and environmental challenges involved in developing Grand Lakes demonstrated that it was possible to facilitate orderly residential development of land previously considered to be floodprone. The drainage system designed for the estate has established a high benchmark for this type of development, allowing development to be considered in similar areas of the City of Greater Geelong.

Another major engineering and environmental design consideration was the use of water sensitive urban design techniques to reduce nutrient loads entering the lakes and minimise litter entering the dense wetlands where it would be difficult to clean out.

Mr Bisinella said the superior environmental outcome at Grand Lakes showed what could be achieved when developers and relevant authorities worked together in the best interests of the community.

He said the estate also delivered excellent outcomes for its neighbours.

Extensive consultation prior to planning approval led to the developer agreeing to improve nearby road intersections and other modifications.

“It’s fair to say that the success of Grand Lakes has really put Lara on the map,” Mr Bisinella said.